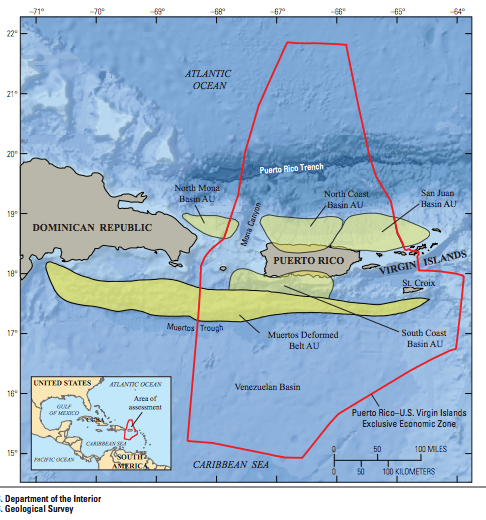 This week the U.S. Geological Survey (USGS) produced an assessment which could possibly lead to the future production of oil and natural gas in the Puerto Rico–U.S. Virgin Islands Exclusive Economic Zone.

Five possible hydrocarbon zones in the region were evaluated, but no others showed “petroleum potential and were not considered further. In addition, there is no potential for oil and gas resources within the onshore area of Puerto Rico or the U.S. Virgin Islands.”

Puerto Rico is an unincorporated territory of the United States, located in the northeastern Caribbean.

News of the USGS report made the front page of Friday’s El Nuevo Día, Puerto Rico’s largest newspaper, under the headline: “Possible extraction of Puerto Rican petroleum and natural gas.”

Reaction to the story has gone viral on the newspaper’s Facebook page, Al Jazeera America said, with thousands of likes and hundreds of shares.

“Several Puerto Ricans are also commenting about what this would mean to the island, currently a U.S. territory whose residents are American citizens,” the report said.